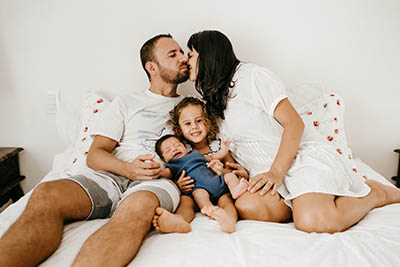 “All about getting your period”: when and how to talk to your child about menstruation

Talking about sexuality to kids may prove embarrassing and it may be even worse to talk about menstruation, given the stigma that surrounds this event. We use euphemisms to tackle the topic: the Bloody Mary, That Time of The Month, Code Red, Shark week and so on. In other words, we prefer to hide and avoid it. Early conversations on the menstrual cycle can, though, prepare children for what’s to come, normalizing this experience and shaping their future attitudes. This conversation may start by proposing a time to watch this video together and here are 5 points to bear in mind when talking about menstruation.

Having something to rely on, like the video above mentioned, is itself a great start. If you already watch cartoons with your child, you can suggest watching something else like that. Do not feel anxious or nervous, the child will feel your attitude. Take it like a light but important conversation. Remember you are not an enemy, a stranger or a general for your child, rather you are an ally that is there to support them: “We have never discussed this together so far, but I wanted you to know that I’m here if you have any concerns”. Do not be “cringe”: avoid starting to talk about it because the cat has had periods and avoid pressuring too much. Research also shows that “making it a big event”, like telling all the parents, is the only thing that actually brings embarrassment. Keep it simple.

Parents often focus on the biological and hygienic aspects of menstruation and often emphasize pain and messiness. Instead, adolescent girls want to also know how menstruation would feel and want an opportunity to process their own subjective experience. In young adulthood, girls want then to address more complex topics such as having sex during menstruation. Talking about possible hormonal and mood fluctuations, distinguishing it from the “hysterical menstruating person” stereotype is also important, as well as targeting usually heard myths like “You should avoid exercising during periods”, “During periods is better to avoid cooking or taking care of plants” or that is better to avoid some foods.

4. The experience of pain

“Having pain is normal” is a sentence that most people with a female reproductive system hear from the menarche. This is partially true. The contractions of the uterus are not what one would describe as pleasurable. At the same time it is difficult to rate the experience of pain and with this mantra to follow a lot of people end up bearing pain and ignoring the possibility of suffering from other conditions such as endometriosis.

5. The role of fathers

Family structure and people in it are still influenced by role expectations, but at the same time, children also expect support from their fathers. In some cases, the father may be a single parent, or he may have a stronger bond with one or more children finding himself in the position to talk about such topics. There is evidence that children of fathers who have more open and positive communication approaches about sexuality have a more holistic understanding of sexuality, which suggests that fathers could play a positive role in educating their children about menstruation.

If you want to know more about hygiene, pads and tampons click here.

When and where you should talk about Sexuality to your Child